Why do Consumers Buy Smart Speakers?

Is the Amazon Echo a Smart Speaker, or is it a Smart Microphone? Is it a Voice Assistant or a Smart Home Hub? While not quite an existential question, it is worth pondering nonetheless. Apparently there are now tens of millions of Alexa-enabled devices worldwide. It made me wonder why people are buying these devices. What are Smart Speakers helping them accomplish?

Recently I read an excellent teardown of two smart speakers – an Amazon Echo Plus and a Sonos One. The author’s conclusion was that Sonos is fighting a losing battle, that the design decisions in the Amazon Echo Plus indicate that it is a superior Smart Speaker. In the author’s opinion, the Sonos One is a speaker masquerading as a connected product, that Alexa has been added as an afterthought. On the other hand, the Echo Plus is a connected product from the ground up, integrated to take advantage of the Amazon ecosystem.

Other readers were quick to point out that the hallmark of Sonos is the audio quality, and that consumers who buy Sonos are attracted to it’s high fidelity sound and are perhaps less interested in Alexa. This suggests that there is a “discerning listener” sub-category (segment) in the smart speaker category.

Let’s ignore all that for a moment and focus on how consumers actually use the product after buying it. After all, zombie users, who buy products and then don’t use them, are nothing new. There are not many publicly available studies on Smart Speaker usage. A survey by Code Computerlove suggests people mostly use their smart devices for mundane things. 20% of the 1000 users surveyed, wanted to know how to boil an egg. 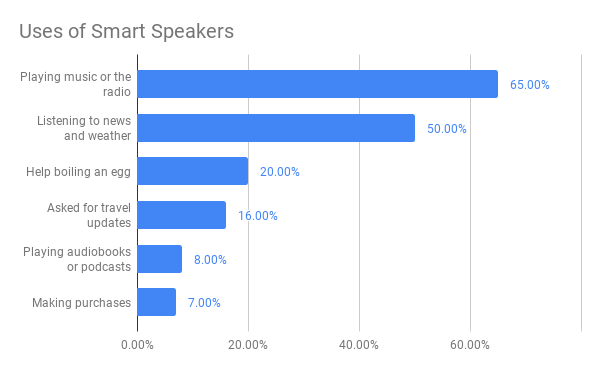 When asked what they wish their smart speaker could do, respondents’ answers got a little more personal. Most people wanted help with jokes, language and dating. 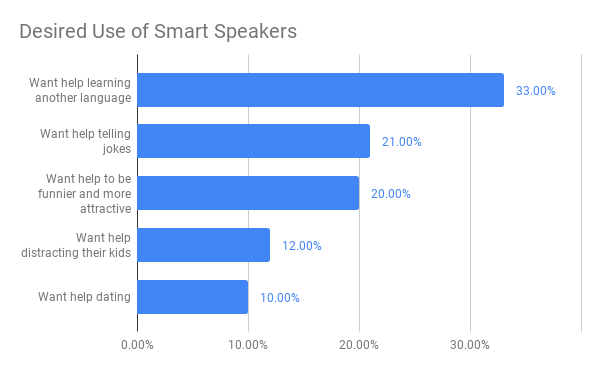 Marketwatch reports another survey by Adobe Analytics that found similar results: Consumers reported listening to music, asking questions about the weather and setting reminders as the top uses. 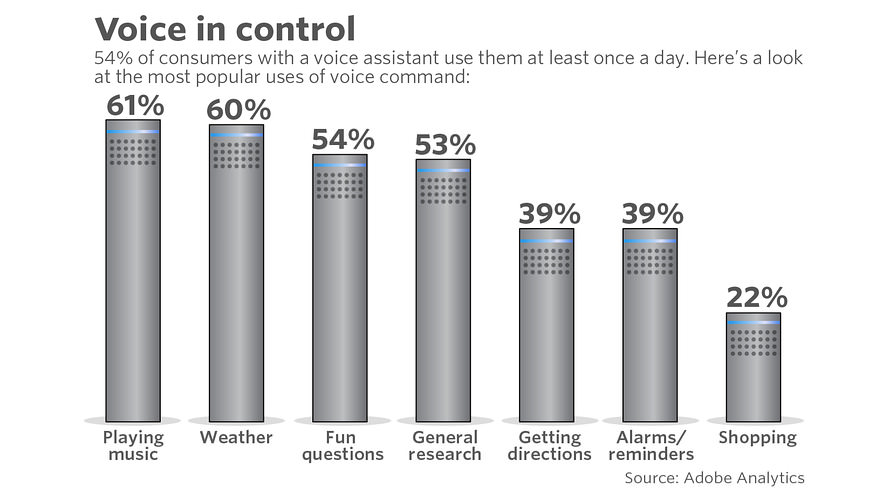 We know that for Amazon, Google, and others, the Smart Speaker is much more than a voice assistant. It’s a play for the consumer’s home, to invade and rule it. There is a long way to go, voice interaction brings along with it the inevitable limitations of diction, accent, slang, acronyms, jargon, intent, localization, etc. Moreover, there are just too many languages out there. Not to mention the fact that without visual cues and displays, relaying information back to the user is difficult. Users have to be very attentive, and can easily lose track if the information is too long or complicated. Repeating, storing, and recalling at a later time is cumbersome. And the shadow of the omnipresent big brother is hard to shake off. According to the survey by Code Computerlove, voice assistant users have trust issues:

That brings me to the real question that is bothering me: why are users buying these things, given all the limitations and privacy concerns? The information that they are asking for can be easily obtained from other sources such as phones and computers. In a constrained environment such as cars, voice assistants could be useful, but why in the home? Various explanations like simplicity, novelty, interactivity, and companionship come to mind.

The JTBD explanation for a user’s purchase decision is that the user is looking for some form of change or progress in their life. Their life with a product in it is somehow better (in their opinion) than what it was before the product. At least, that is the expectation when buying a product. Of course that does not mean that all the millions of Smart Speakers were bought for the same reason. But there must be a a few underlying reasons, some situations, some common themes that bind them together.

In my experience, not many families cook together, watch the same series on television, or listen to the same music, or use the same telephone for calling. That makes me think that a single device would probably be used by those living by themselves and some couples. For families, the device would be more of a novelty or for fun and games. The simplicity of asking a question and possibility of companionship (the sound of another voice) may endear it to seniors. We went from devices without displays and keyboards, to smartphones, and tablets, and computers, and now back to faceless standalone voice assistants. Maybe the convenience of not having to pick up a smartphone or laptop or remote control is in fact comforting in some situations.

What is a the Smart Speaker a most logical extension of? From the way it’s being used by early adopters, it would seem to be an entertainment unit. That makes me speculate that a television which already forms a central fixture in many homes, and has good sound system built in, would a make a good candidate for future versions of Smart Assistants. Or there could be multiple cooperating units involved, with standalone assistants and embedded assistants.

Telecommunications companies lost a huge chance here. Routers and modems that are ubiquitous in Internet-connected homes were ideal delivery mechanisms for Smart Assistants. If Amazon decides to include a 5G cellular gateway in its next Echo Plus, there will be no more need for ADSL or Fiber or Cable.

So, a knowledgeable, trusted, helpful assistant, who can talk to you, entertain you, provide tips and answer questions, remind you of events, give shopping suggestions, sounds like a cure for loneliness to me. A friend, a confidante, a companion, someone who looks out for you all the time, is that what consumers are missing? With thousands of “Skills”, Amazon’s vision for Alexa is far-reaching. It is an ambient, sentient intelligence that knows all, hears all, anticipates, and responds.

If as I speculate, the Job-to-be-Done of Smart Speaker buyers is indeed to alleviate loneliness or to have a trusted companion, then I salute the product managers at Amazon and Google who pioneered this concept. Because the Smart Speaker is in fact an answer to the question, “How can I make my user’s life at home easier, more comfortable, more enjoyable?”, and it is almost impossible to arrive at that answer, make that logical leap, if you consider the primary function of the device as streaming music. For someone to have understood the potential of the technology and used it to transform people’s lives is truly fantastic. I hope they realize the power they have in their hands and develop it further, responsibly, to deliver on their promise.